Giving new life to the heart of the community 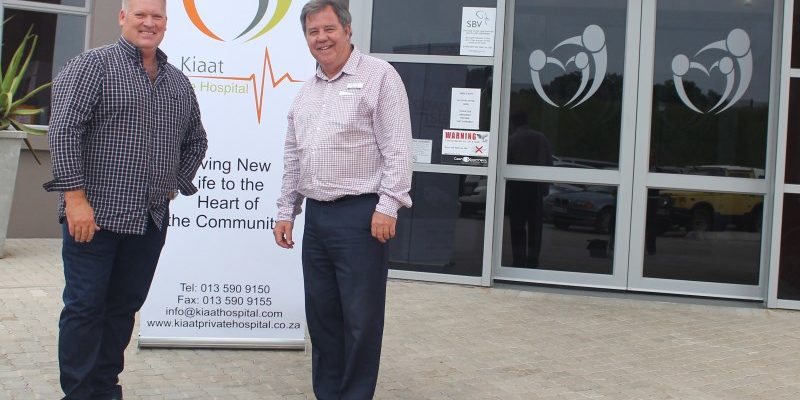 MBOMBELA – Kiaat Private Hospital has appointed a new chief executive officer (CEO), Mr Michael Strauss. He has been in hospital management since 1993 and starts working on March 1.

This follows the resignation of the former CEO, Dr Corné Ackerman in January. Mr Tony Lundin, CEO of the management company, Nozala Health Partners (NHP), a joint venture between Health Partners UK and Nozala Investments, spoke to Lowvelder about Kiaat. He has been acting as manager since Ackerman’s suspension in December.

Strauss will reside at the hospital for the first three months of his tenure to get a feel for the place. “That is the commitment you have to give. You have to know everything. You are at the beck and call of each doctor and patient.

This is the kind of service Kiaat strives to offer patients who are unwilling to face the public health-care sector. “Nobody wants to go to hospital. If staff understand that people don’t want to be there and have to pay a lot of money to be there, then you get good service,” Lundin explains.

“Health care is a sensitive industry. People are very critical about the slightest thing. In health care mistakes happen. What is important is how you deal with it.” But in the public sector, “there is a lot of politics because there is huge money in it. Health care is always in people’s faces. But there is a lack of management – the skills have gone”.

Hence people turn to private hospitals. “We have got to do something about reducing the cost of health care. There is collusion between hospitals and medical schemes. We don’t need to make an abusive margin. Kiaat is affordable.” As a former financial director at Netcare, Lundin has experienced first-hand how much money was made off mark-ups in the price of medicine. These margins have now been set at zero per cent in South Africa, so hospitals artificially increased their prices for beds and operations, he says.

“It has gotten out of hand. You can’t justify what you are charging.”

Other challenges include a shortage of nurses in the country. Lundin says his own mother took early retirement from being bogged down by administrative tasks. To avoid them from burning out, Kiaat employs porters who command lower salaries, to take care of administration, freeing nurses to only care for patients. Lundin argues that another aspect which gives Kiaat an edge in keeping costs down is that it is not owned by a listed company. Yet a total of 20 per cent of the hospital is owned by a group of doctors. Referrals have slowly been building up with the staff profile changing almost daily as they grow. Lundin says they are 50 per cent ahead of their targeted numbers of patients.

As pregnancy is not a state of illness, the maternity ward is on a separate floor from the rest of hospital. Its first water birth was also recently performed. Kiaat doesn’t yet offer specialised cardiology or oncology care. “I would rather spend more time planning it. We are to going to be here for five minutes. This will still be here long after us.”

Benefits of eating 5 servings of fresh fruit and veg each day
January 28, 2022

We use cookies on our website to give you the most relevant experience by remembering your preferences and repeat visits. By clicking “Accept All”, you consent to the use of ALL the cookies. However, you may visit "Cookie Settings" to provide a controlled consent.
Cookie SettingsAccept All
Manage consent

This website uses cookies to improve your experience while you navigate through the website. Out of these, the cookies that are categorized as necessary are stored on your browser as they are essential for the working of basic functionalities of the website. We also use third-party cookies that help us analyze and understand how you use this website. These cookies will be stored in your browser only with your consent. You also have the option to opt-out of these cookies. But opting out of some of these cookies may affect your browsing experience.
Necessary Always Enabled
Necessary cookies are absolutely essential for the website to function properly. These cookies ensure basic functionalities and security features of the website, anonymously.
Functional
Functional cookies help to perform certain functionalities like sharing the content of the website on social media platforms, collect feedbacks, and other third-party features.
Performance
Performance cookies are used to understand and analyze the key performance indexes of the website which helps in delivering a better user experience for the visitors.
Analytics
Analytical cookies are used to understand how visitors interact with the website. These cookies help provide information on metrics the number of visitors, bounce rate, traffic source, etc.
Advertisement
Advertisement cookies are used to provide visitors with relevant ads and marketing campaigns. These cookies track visitors across websites and collect information to provide customized ads.
Others
Other uncategorized cookies are those that are being analyzed and have not been classified into a category as yet.
SAVE & ACCEPT